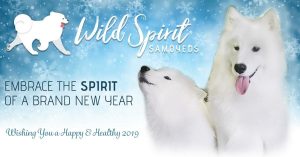 Happy New Year from Wild Spirit Samoyeds. We had an exciting last quarter of 2018 and focused mostly on conformation events with Aster while Sadie went out of coat. Plus, we knew if all the cards fell into place, there was an outside chance that Aster could earn her AKC Grand Champion title. We had shows throughout Texas in Marshall, Belton, Austin, Conroe and Dallas. We also focused on our own handling skills and had a few private handling lessons. Aster showed very well through the fall, with several best of breed wins, best of opposite sex and GCH selects and by early December had amassed 12 GCH points and two 4-point majors (you need 25, with 3 majors and 3 events with other champions defeated).

The Dallas (Dec 7-9, 2018) show ended up pulling big numbers and all 3 days had 3,4 & 5 point majors depending on where she finished. Calculating in advance, we knew that she would have to take two best of opposite (BOS) and 1 GCH select to earn her title, which with the large numbers and great competition, was a pretty tall order. Plus, the judges were all wildcards to us, meaning that we’d never shown to them and had no idea if they would like our “style” of samoyed. Aster rocked the house and took 3 BOS for 14 GCH points and 3 more majors for a total of 26 point and 5 major. She also finished with 8 events defeating another CH, which represented every GCH point. Her finish on December 9, 2018 was 3-days before her 1st birthday, an astonishing fast finish for such a young girl. Quite a grand finish to an already spectacular year. 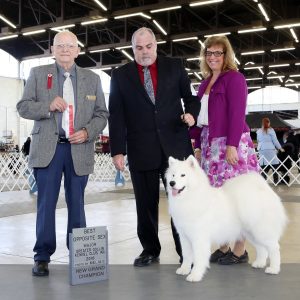