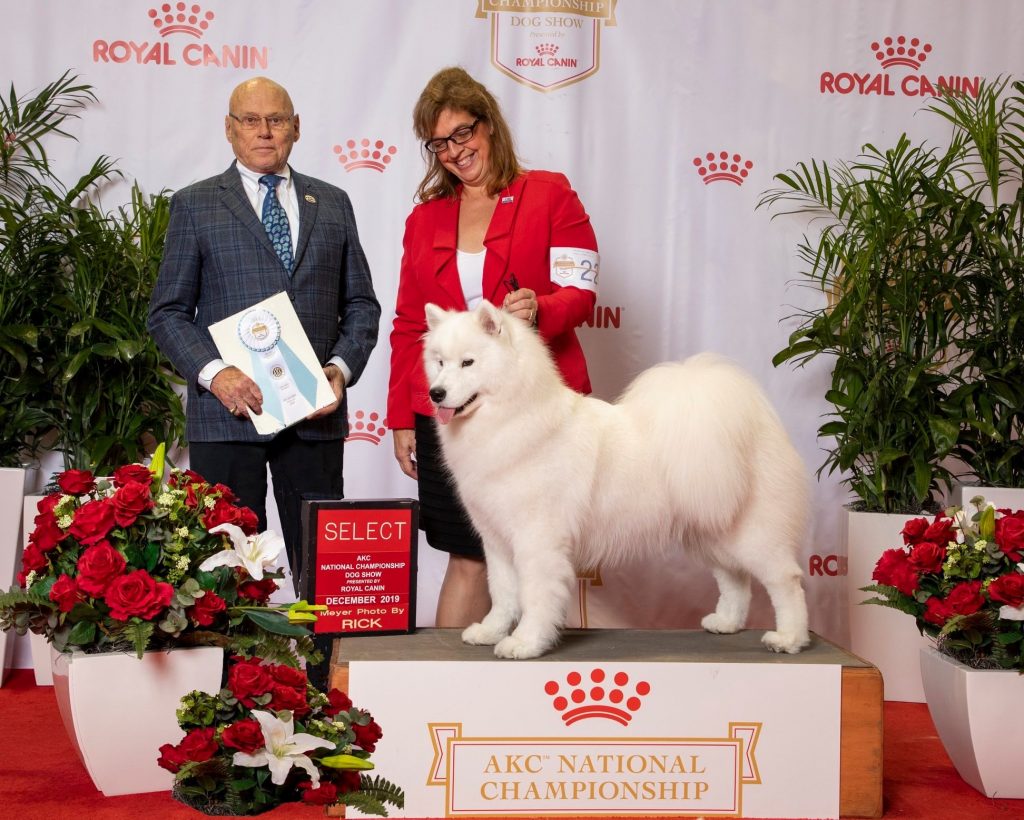 Like Sadie, Aster came to us via Bark Bark Samoyeds in Northern Arizona. She is Sadie’s full biological sibling that came out of a repeat breeding due to the quality and consistency of Sadie’s litter. Aster excelled in the show ring early. We entered Aster into three AKC 4-6 month puppy shows here in Texas and she won all three, beating out over 85 other puppies (total) under 3 different judges. She officially began her AKC show career at 6 mo old (6/12/18) and 1 month and 9 days later after just 10 shows became an AKC Champion on 7/21/18 in Houston, TX. This was just 18 days shy of her Grandmother’s AKC record. She earn her AKC Grand Champion in Dallas, TX on 12/9/18, just 3 days shy of her first birthday.

Aster continues to show and excel in the conformation ring. Aster is a multiple regular Group Placer and has had numerous Owner-Handler (OH) Group one placements and multiple OH Best In Show & Reserve Best in Show titles. In 2019, Aster qualified for the AKC National Owner Handler Series (NOHS) finals in Orlando, FL in December 2019 by ranking as the #6 Samoyed in the country for the NOHS. In Orlando, Aster won Best of Breed in the 2019 NOHS Final and was Select Bitch in the 2019 AKC National Championship. 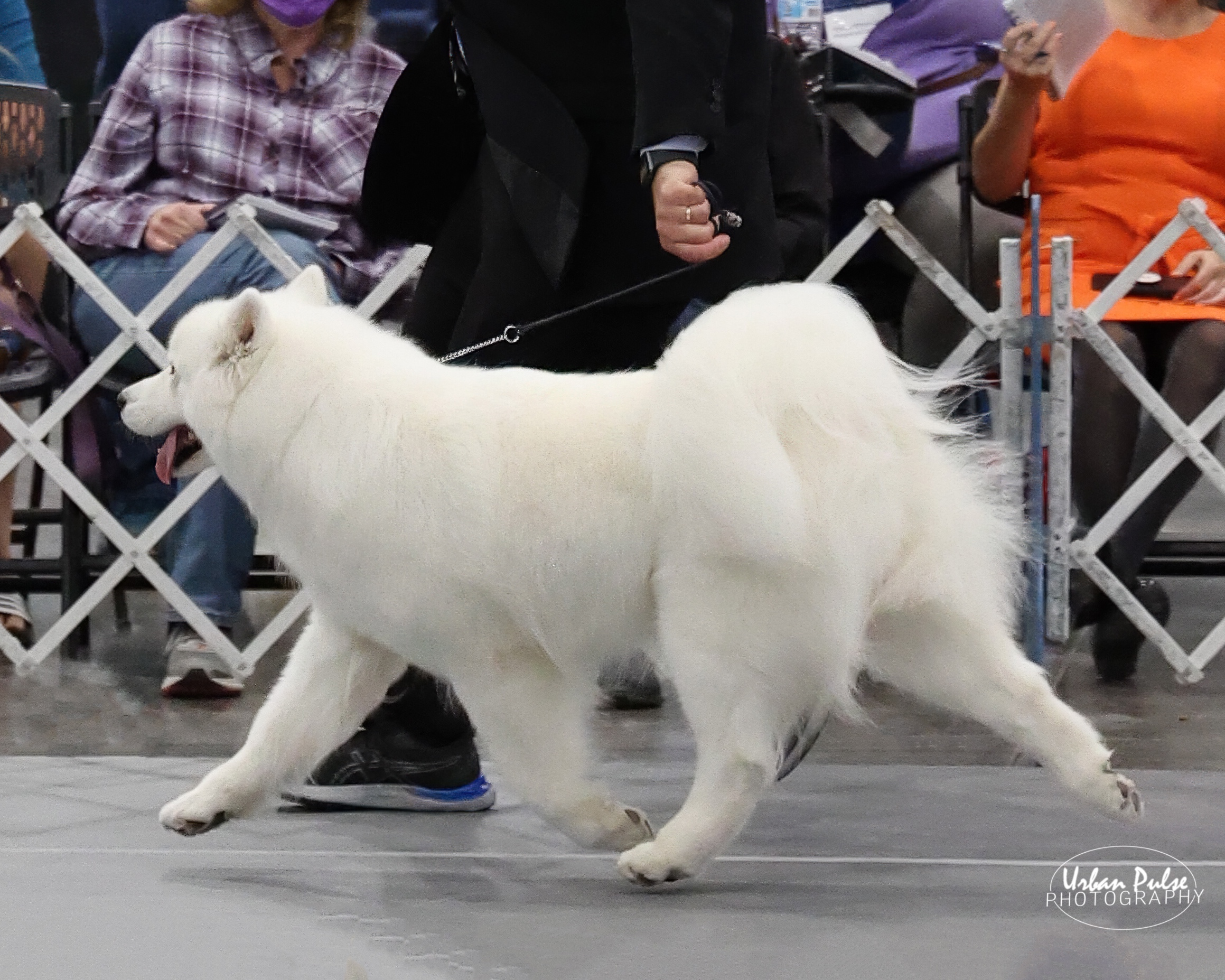 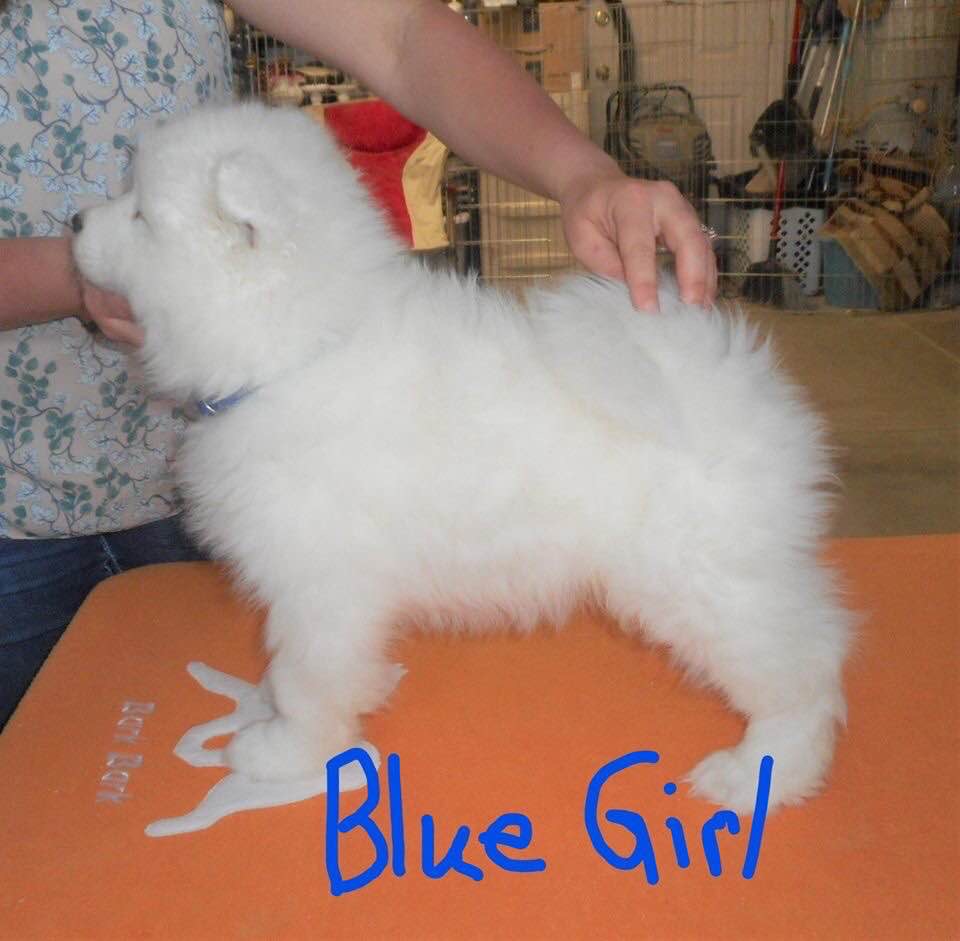 Here she is! Aster is Blue Girl! Little Desert Star in the making. 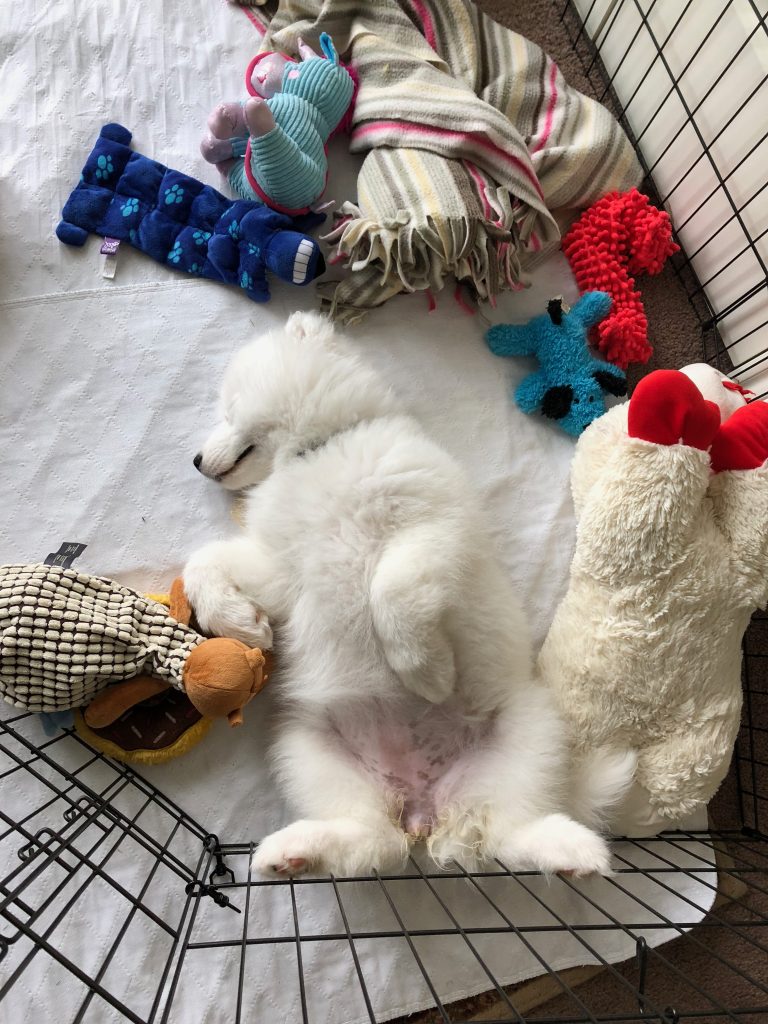 Another Upside Down Sleeper

Being such a good puppy at 11 weeks, Aster is enjoying a good upside down nap with her best toy friends. 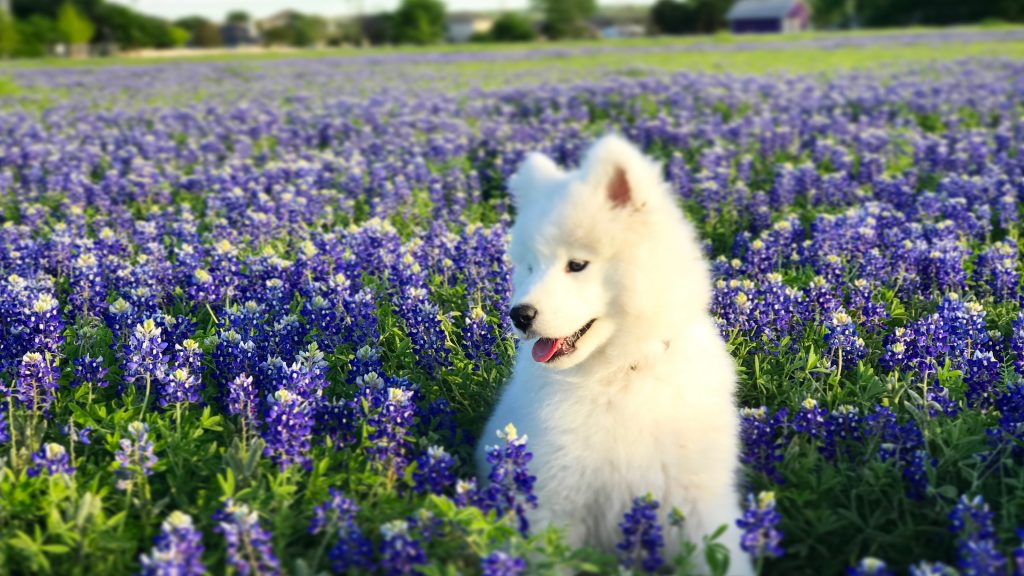 Aster in the Bluebonnets. March 2018.

Posing in the beautiful bluebonnets at about 3 months old. Round Rock, TX 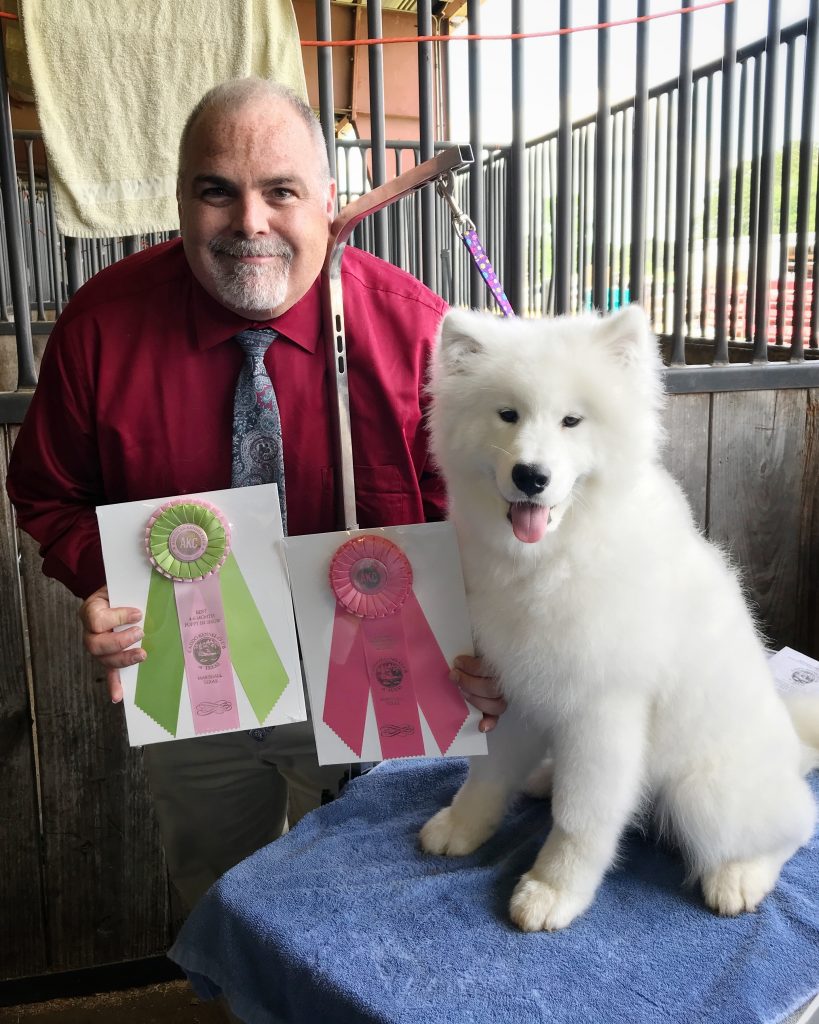 Shown by Tim Dubois for her very first show, Aster exploded onto the scene with two days in a row of winning Best 4-6 Month Puppy in Show. WOW! Our little star. 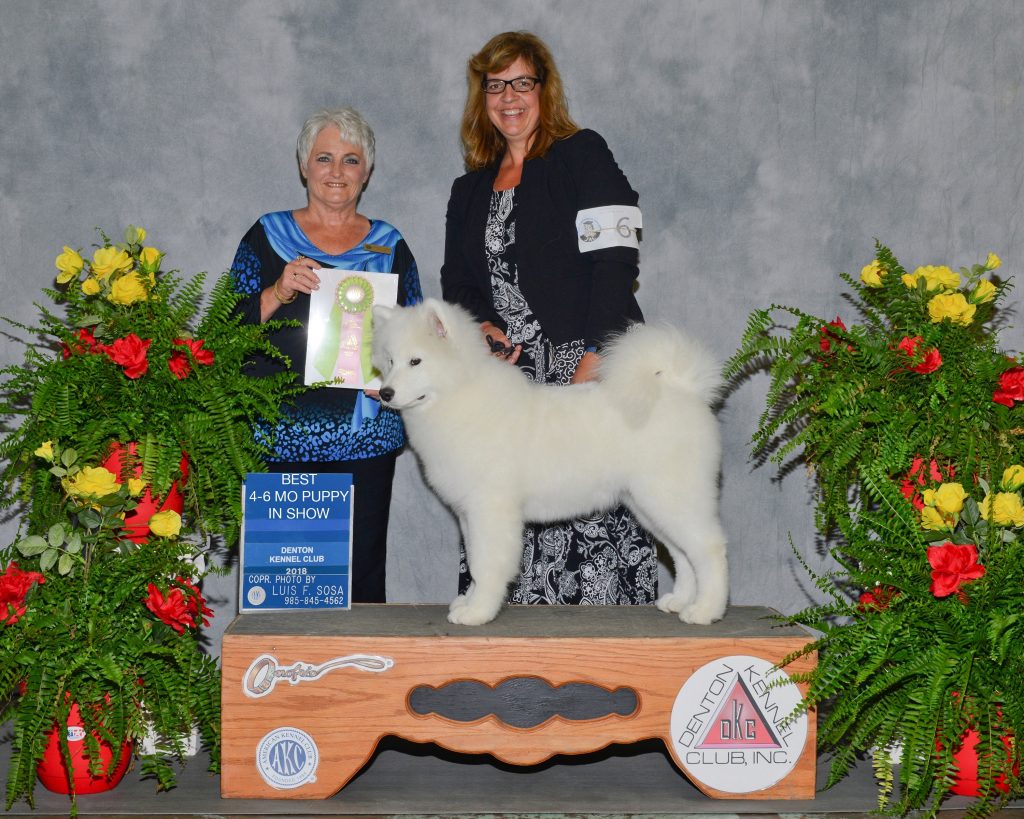 Shown by Katie Dubois with special thanks to Judge Deborah Verdon who found Aster for Best 4-6 Month Puppy in Show at Denton, TX. May 2018. Her third such win, she tied her Grand Dam's success in the ring in the 4-6 month puppy class!

Aster looks stunning after her bath and grooming session as we ready her for her very first official show weekend which will be in our hometown Henrietta, NY. 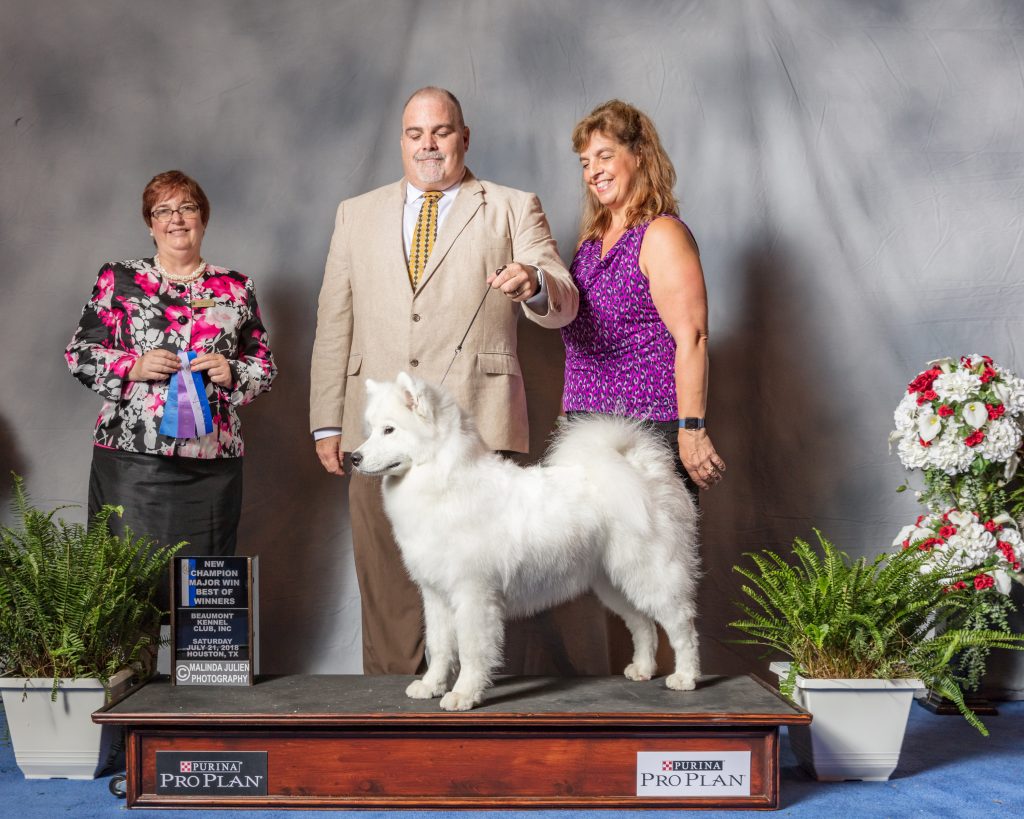 Shown by Tim Dubois with special thanks to Judge Cindy Stansell who found Aster for Winner's Bitch and Best of Winners, a 5-point major to complete her AKC requirements for Champion. At just 7 months and 9 days, this girl is something special.